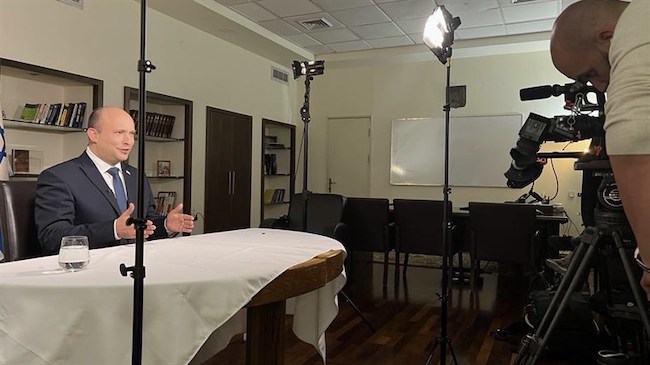 Prime Minister Naftali Bennett was interviewed yesterday by CNN’s Christiane Amanpour. She grilled Bennett on the latest wave of violence and its implications for his and his government’s political future.

Asked to explain why he allowed IDF soldiers to enter the Temple Mount, given the fact that the footage is then broadcast over the world and inflames tensions, Bennett replied, “As usual, you’re starting in the middle of the story.

Amanpour grilled Bennett on false facts, such as, “The West Bank has been occupied since 1967, settlers are allowed to be there … they are there and they are violent, this minority, and it is generally deemed illegal by the rest of the world,” to which Bennett pushed back saying the statement is “blatantly false.”

Bennett staunchly defended Israel in this interview and it’s not the first time he has done so, now or before becoming Prime Minister. He defends Israel so well; it’s becoming clear that instead of his current position he should take on a new public relations role that disseminates and defends the truth about Israel across worldwide media outlets. There is much needed PR to counteract the endless false narratives against Israel that we don’t see coming from Israel itself. If the world is to know the truth then Israel must be the one to disseminate it.

Benjamin Netanyahu, in his 1993 book, “A Place Among the Nations”, was right to point out that the one thing Israel must do is to mass communicate to the world. “Having rediscovered its military capabilities, Israel is now in the midst of discovering the political capacities it needs to survive in a swiftly changing world. These capacities require, I believe, a major overhaul in Israel’s abilities to present its policies before world audiences.” ~~A Place Among the Nations, Page 386.

Sources:
PM Bennett to CNN: ‘I object – these are not occupied territories’, by Israel National News, April 20, 2022