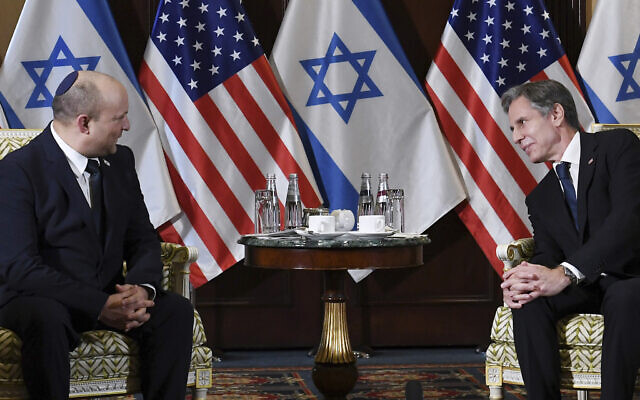 Bennett spoke with US Secretary of State Antony Blinken, in a conversation that largely focused on the Iranian talks, according to a statement from the Prime Minister’s Office.

Bennett told Blinken that Iran was utilizing “nuclear blackmail” as a tactic and therefore the United States should initiate “an immediate cessation of negotiations.”

According to the Prime Minister’s Office, Blinken provided Bennett with an update on the talks, which restarted earlier this week in Vienna months after they were suspended. The State Department did not immediately provide its own readout of the call.

In the phone conversation, Bennett referenced a report by the International Atomic Energy Agency revealing that Iran has recently begun enriching uranium to 20% purity with advanced centrifuges at its Fordo facility.

AFSI commends Prime Minister Bennett for his consistently strong stance working to prevent Iran from obtaining nuclear weapons. We question whether his less vigorous stances on the US consulate in Jerusalem and building in Atarot (sovereignty) are due to what many perceive as the existential threat of Iran overshadowing these issues. With Israel’s report on Iran’s “nuclear blackmail,” we pray that the dangerous position that the United States persists in taking, may do a turn-around.

Source:
Bennett to Blinken: US must immediately halt Iran talks over ‘nuclear blackmail’, by Amy Spiro/Times of Israel, December 2, 2021