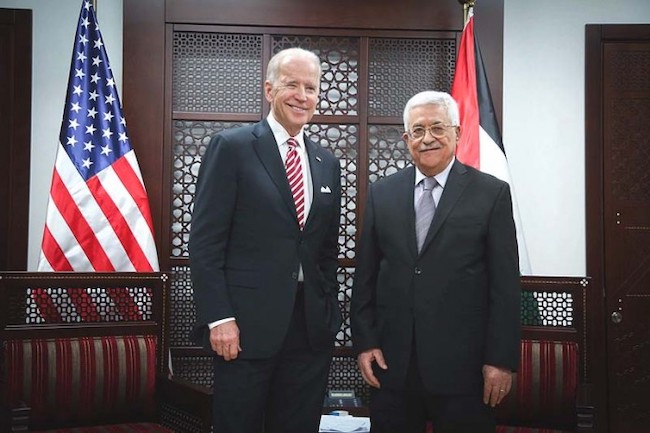 The Biden-Harris administration is looking to hit the reset button with the Palestinian Authority, including the return to a more traditional (and consistently failed) position on a two-state solution. Plus, they aim to roll back several significant Trump administration positions on Israel.

The four-page memo, “The U.S. Palestinian Reset and the Path Forward,” was obtained by The National, an English-language news outlet based in the United Arab Emirates. It was reportedly presented to U.S. Secretary of State Antony Blinken on March 1.

According to the delusional memo, the Biden administration will seek to achieve Israeli-Palestinian peace under a two-state solution framework “based on the 1967 lines with mutually agreed land swaps and agreements on security and refugees.”

Americans For A Safe Israel/AFSI does not endorse a two-state solution and neither do the majority of Israelis.

Among the other damage Biden looks forward to is a restoration of UNRWA funding. This would increase the terrorist agenda against Israel. He’ll also roll back some Trump administration policies favorable towards Israel such as the right to put “Product of Israel” labels on goods manufactured in Judea and Samaria.

Americans For A Safe Israel strongly condemns the contents of Biden’s despicable and damage filled four-page memo. The best thing the Biden administration can do for Israel is to do absolutely nothing. In addition to the memo, any other plans this administration has slated, i.e., re-enter the Iran deal, only take many steps backward to crush the success the Trump administration achieved for Israel. Biden’s agenda is a resurrection of old attempts at peace that have consistently failed again, and again, and again. Placating terrorists never works.

It is obvious that the Biden administration has no new plans and certainly no new way of thinking when it comes to supporting Israel against the hostile forces that surround her. Anything Biden and his incompetent, anti-Semitic, corrupt colleagues attempt to implement in the name of peace between Israel and the PA will only threaten Israel’s security, defense and her very existence. Biden’s intentions to jump-start peace by starting in reverse do not make him a friend to Israel.

‘The National’ obtains US official document for Palestinian ‘reset’, by Joyce Karam. the National, March 17, 2021