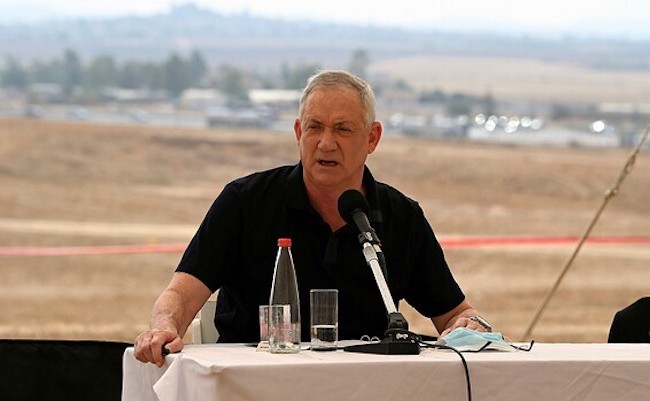 Prominent figures on Israel’s Right are furious with Defense Minister and Blue and White leader Benny Gantz for making a comment to a Saudi news outlet last week. Gantz said that he did not envision full regional peace without the Palestinians and that Jerusalem had enough room to include the capital of a future Palestinian state.

Jerusalem Affairs and Heritage Minister Rafi Peretz (Habayit Hayehudi) said in a Twitter post that “United Jerusalem is the eternal capital of the Jewish people, not the capital of anyone else. This is where our forefathers walked and this is where we were created. Gantz, I know you enough to know you believe that, too.”

Gantz was also criticized by the movement Habitchonistim, comprised of former military officials, who issued a statement calling on him to resign and take back his remarks.

“Gantz’s statements absolutely contradict Israel’s principles of security and have the potential to cause great harm to its security … In his remarks, Gantz gives up the most basic principle on which Israel was founded – our ability to defend ourselves by ourselves, and instead calls for ‘security guarantees’, read a statement authored by three retired majors-general (Jerry Gershon, Gershon Hacohen, and Danny Biton) and signed by a number of retired brigadiers-general and some 1,500 members of the movement.

As a former IDF Chief of Staff dedicated to Israel’s security, we can’t imagine what Gantz was thinking when he made his comment and we agree that Gantz should retract it. Between his comment and the PA dreaming of negotiating a two-state solution with a Biden administration, we pray that this nightmare ends quickly.

Palestinians urge Biden and Israel to return to the negotiating table, by Gabe Friedman. JTA, December 20, 2020