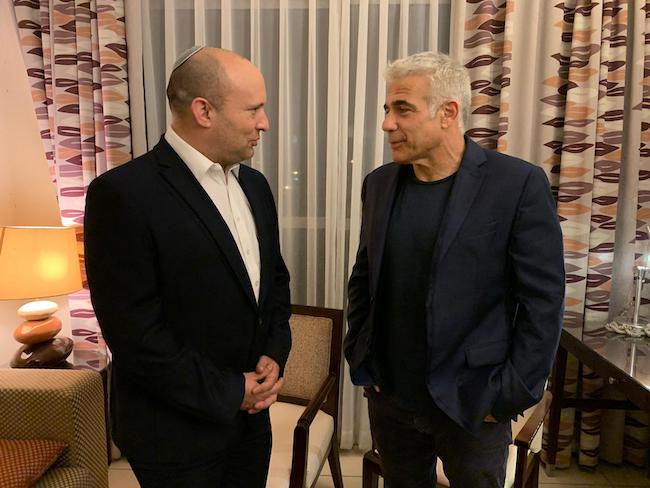 Negotiations between a broad coalition of parties from across the spectrum lasted until almost midnight deadline; coalition agreement includes Arab party for the first time in Israel’s history; deal sidesteps the threat of a fifth round of elections since April 2019

An amalgam of parties from across the political spectrum reached agreement Wednesday night to form a government that spells the end of Benjamin Netanyahu’s 12 years as prime minister. Or does it?

Yesh Atid leader Yair Lapid struck deals with his partners in the so-called ‘coalition for change’ with less than an hour to go before a midnight deadline that would have seen the mandate for forming a government returned to President Reuven Rivlin and likely sent Israel into its fifth round of elections since April 2019.

That was last night. The Times of Israel reported just today that the attempt to quickly swear in the new government appears to be off the table as Joint List support was rejected. Lapid and Bennett wanted to oust Likud’s Knesset speaker so the coalition could take office next week, but were derailed by Yamina MK Nir Orbach who opposed the move. Orbach considered resigning and is fed up with Bennett reneging on his pledges.

Orbach seems to have been brought back into the fold after meeting with Bennett, but the Yesha Council, and many Likud members who favor expansion in Judea and Samaria are having emergency meetings. There are many MKs who are truly right wing and in all likelihood are not happy with this move. We hope at least one comes to their senses. That’s all it takes to topple this coalition.

Talk about making deals with the devil! This cobbled together group is so disparate in its goals and beliefs that if it gets off the ground it’s bound to crash! Things are moving very quickly in Israel let’s pray they move in the right direction.

An astute OpEd from today’s Arutz Sheva puts all this into context.

Lapid informs Rivlin he has succeeded in forming a government, by Ynetnews.com, June 2, 2021