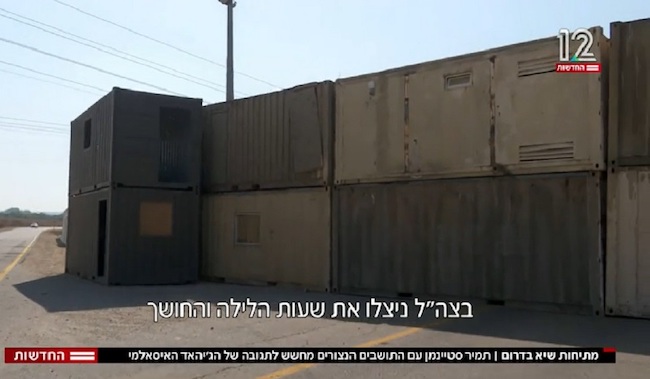 Residents of Israeli communities along the Gaza border are essentially being held hostage by security measures implemented to keep them safe in the face of rising tensions with the Palestinian Islamic Jihad (PIJ) terrorist organization.

The IDF reinforced its Gaza Division with 100 reserve troops who were called up Tuesday, along with three active duty companies, to help implement the security measures. This was in response to threats by PIJ to attack Israel in retaliation for the Monday night arrest of Bassam al-Saadi, the group’s local commander in Jenin, and his son-in-law and aide, Ashraf al-Jada.

A closure has been imposed on Gaza Envelope communities — no one in, and no one out during daylight hours – while roads in the area, including some main highways, are likewise shut down to traffic. Kibbutzim Nahal Oz, Netiv Ha’Asara and Kerem Shalom have been blockaded entirely, although some of the other communities have alternative exit routes. Soldiers used massive shipping containers to blockade the roads, hoping to prevent a terrorist attack (photo above). Train service has been suspended between Ashkelon and Sderot, and between Ashkelon and Netivot. Several bus lines have been suspended as well and Zikim beach is closed. The alert is, for the time being, expected to continue on Friday.

The PIJ’s threats against Israelis are real and being taken very seriously. Residents now live with a measure of uncertainty and the summer programs for children have been moved to bomb shelters. Despite residents being under a “hostage” type scenario, they are mostly supportive of the security reinforcement measures the IDF has placed upon them. We pray that this ends soon with no confrontations or escalation of terror attacks.

With the focus on Iran, the West Bank simmers in the background, by Dr. Eric R. Mandel/JNS, August 3, 2022