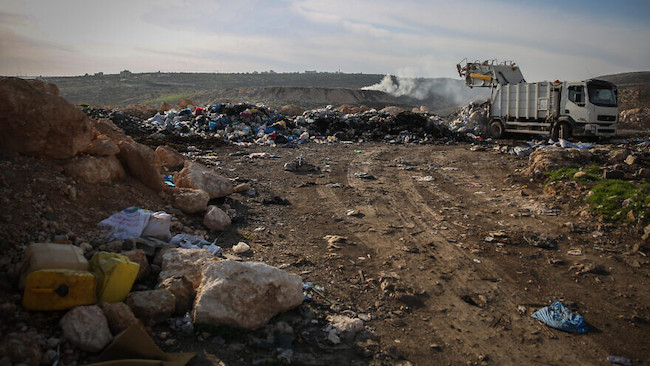 Exploiting the furlough of Israeli Civil Administration inspectors during the coronavirus shutdown is the latest illegal act by the Palestinian Authority. Convoys of PA municipal garbage trucks have been dumping thousands of cubic meters of refuse from Ramallah and El Bireh into the Binyamin Region’s Tarrifi Quarry, just outside the Jewish communities of Kochav Ya’akov and Psagot.

Regavim released video and photo documentation this past week of the ecological crimes being carried out by the PA at the site.

Binyamin Regional Council Head Yisrael Gantz responded to the illegal dumping stating, “this is an ecological terror attack. It seems that taking care of the natural resources of this area is of no concern to the Palestinians, even though the pollution harms all Jews and Arabs alike. The State of Israel must take responsibility and show its concern for a clean and safe future when it comes to the environment.”

An immediate end to this ecological crime should be the Civil Administration’s top priority. As Naomi Kahn of Regavim notes at the end of this article, “If a person on a hike in Israel throws away a cigarette and is caught, it’s a 750 NIS fine. The PA has dumped thousands of kilos of raw garbage and has not been fined or held responsible.”