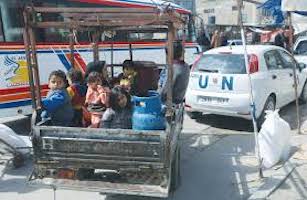 In 1978, Dalal Mughrabi took part in the Coastal Road Massacre in which an Israeli bus was hijacked. Thirty-eight Israelis lost their lives in the attack, including 13 children. To Israelis, Mughrabi is a terrorist.

To the Palestinians, she is a national treasure. Children are taught to emulate her example. She also pops up regularly in textbooks, where she is lauded as martyr and a hero.

Responsibility for reaching a definitive ruling on Mughrabi’s status – if such a thing is possible – may ultimately fall to Philippe Lazzarini, the incoming commissioner-general of the United Nations Relief and Works Agency (UNRWA) for the Palestinians.

Lazzarini tells the Jerusalem Post, “We have zero tolerance for [teaching] incitement or violence. We are focused on human rights values in our schools.”

To the contrary, sources in the Israel government said,“Either Mr Lazzarini is living with his head totally in the sand or he is misleading the public,” the Post was told. “UNRWA schools are a hotbed of indoctrination, incitement and total obsession with the right of return. Their schoolbooks are PLO schoolbooks, and their teachers’ manuals are PLO manuals. UNRWA schools are essentially in contravention of UN principles of peace and reconciliation, and are bringing us further away and not closer to a resolution with the Palestinians.”

Lazzarini has every opportunity to make necessary changes to the terrorist preaching, anti-Israel UNRWA curriculum. But will he? We’re not holding our breath.