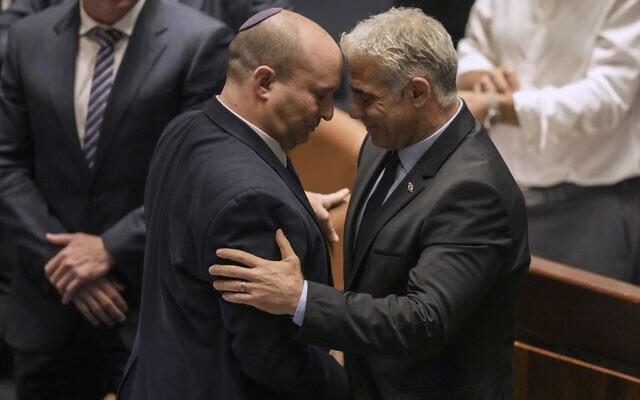 Israel’s Knesset voted 92–0 to disband itself Thursday morning, a little over 14 months after it convened and a year after the government was sworn in. Israel now heads toward its fifth election since 2019, set for November 1, 2022.

Foreign Minister and Alternate Prime Minister Yair Lapid formally succeeds Prime Minister Naftali Bennett as premier at midnight between Thursday and Friday. He will hold the post through the elections and until a new coalition is formed.

Prime Minister Naftali Bennett formally announced his intention not to run in the upcoming elections for the 25th Knesset. He will remain ‘alternate prime minister’ and in charge of the Iranian issue until the next government is sworn-in following the elections. Bennett issued a statement from the Knesset stating that he intends to assist Yair Lapid upon taking office as Prime Minister. “I will help him [Lapid] as much as he needs. I do not intend to run in the upcoming elections, but I will remain a loyal soldier of this country.”

And so the road to new elections begins – again. We’d like to think that these new elections will put the country on the right track. Israel and its citizens are hurting from a lack of governmental continuity. It must get back to adhering to its founding Zionist principles, which have never forsaken the country. Israel’s next coalition must remain true to the implementation of those Zionist values for the sake of the country’s defense, future and safety.

Bennett steps down: I will remain a loyal soldier of Israel, by Israel National News, June 29, 2022