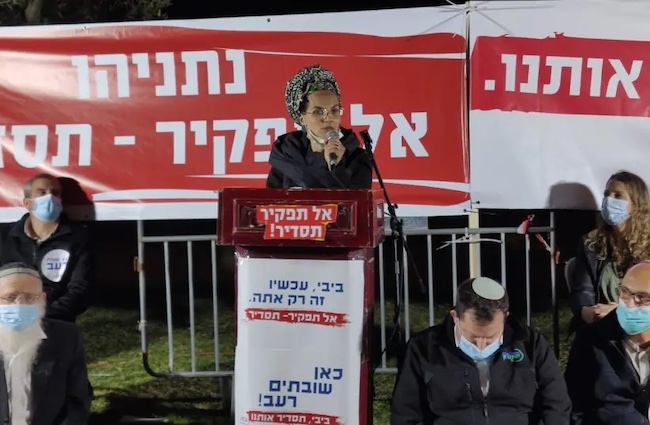 “Does someone have to be killed for lack of security for the West Bank outposts to be legalized,” railed Ori Bartfeld of Asael.

“We have come to understand that right-wing governments have no intention of regulating [legalizing] us,” he said at a nighttime Jerusalem rally Tuesday near the Prime Minister’s Office on Tuesday.

Yael Shevach, a resident of the Gilad Farm, whose husband Raziel was killed in a terror attack near their community in 2018, also spoke. She recalled that the government had voted to authorize the community in which she lived in the aftermath of her husband’s death. Shevach, who is also on a hunger strike, said that “three years later nothing has happened.”

AFSI Chizuk Mission participants visited with Yael on a 2018 trip. At that time we partnered with the non-profit organization,One Israel Fund, to purchase a camera for the entrance to that community (see below photo). Since then Marc Provisor, Security Director of the One Israel Fund has upgraded their security systems. We are with the strikers and hope that the Israeli government does more to provide protection for ALL Israelis, wherever in Israel they live.

Diaspora Minister Omer Yankelevich and Samaria Council Chairman Yossi Dagan came to visit Itai Zar, one of the leaders of the “young settlement” struggle, who collapsed Wednesday night in a protest tent and refused to receive a blood transfusion.

Zar has been on hunger strike for the past nine days in a protest tent, demanding that the prime minister approve a proposal to regulate the “young settlements” at a cabinet meeting next Sunday, which will allow 46 communities to be connected to water and electricity infrastructure.

Sources:
‘Does someone have to die for West Bank outposts to be legalized?, by Tovah Lazaroff. Jerusalem Post, January 12, 2021