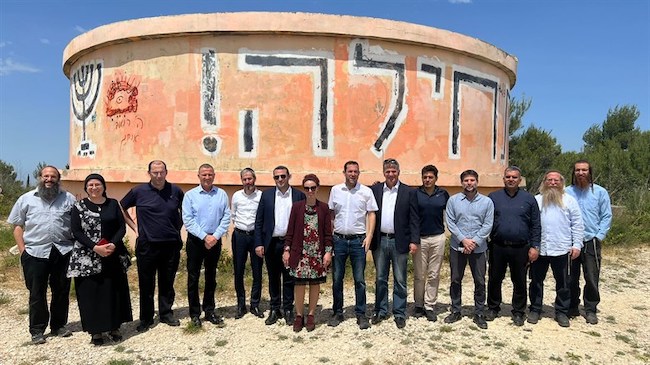 Defense Minister Benny Gantz stated that the Homesh Yeshiva must be demolished. This was just three days before the State is to submit its position on the status of the yeshiva to the Supreme Court.

“Homesh will be evacuated,” Gantz said …”This Disengagement Law requires this.” Foreign Minister Yair Lapid also called for Homesh Yeshiva’s demolition and stated, “there should be no illegal places.”

This Wednesday, a bill canceling the Disengagement is due to come up for a Knesset vote. With this in mind, ten MKs from the Land of Israel Lobby made their visit to Homesh yesterday. Ten Knesset members from the Land of Israel Lobby visited the community. The lobby is headed by MKs Orit Strook (Religious Zionism) and Yoav Kish (Likud) and was also accompanied by MK Idit Silman (Yamina), as well as Samaria Regional Council head Yossi Dagan.

“We came here today – a large group of MKs who represent a majority of our lawmakers – in order to embrace and identify with the pioneers of the Homesh yeshiva, headed by Rabbi Elishama Cohen,” Dagan continued. “We are here to make a clear statement that the expulsion must be rectified. We are united in this demand, that the government take its hands off the Homesh yeshiva and that the community be rebuilt.”

Land of Israel Lobby MKs in Homesh: ‘This govt has no mandate to expel the yeshiva’, by Israel National News, May 22, 2022