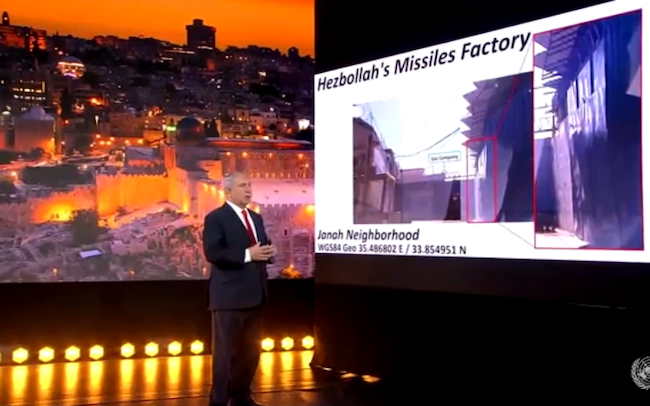 In this speech which addressed the 75th UN General Assembly, Netanyahu recalled the massive blast in Beirut’s port in early August which caused hundreds of deaths and destroyed large swathes of the city.

“Here is where the next explosion could take place,” the Israeli premier noted, pointing to a large screen. “This is the Beirut neighborhood of Jnah. It’s right next to the international airport. And here, Hezbollah is keeping a secret arms depot…adjacent, a meter away, from a gas company. And it’s embedded in civilian housing here…”

Last month’s explosion in a Beirut port was due to weapons stored that were clearly intended for use against Israel. As we saw, due to a twist of fate, Lebanon took an unintentional hit. Today’s exposure of Hezbollah’s secret by Prime Minister Netanyahu should be a clear wake-up call to the Lebanese people – and the world. Accidents happen.

The primary thrust of his speech was a wake-up call to all nations that Iran is a friend to none, even its own people. Its dictatorship has total disregard for not only enemy civilian populations but its own people and those of its proxies. Where Israel wants peace, Iran thirsts only for power. Iran continues to prove what a mistake the JCPOA was and how correct the Trump administration was for pulling out of that bad deal. We can only hope that message is heard and understood by all who truly care about freedom and justice.

*The address was delivered using a pre-recorded video.