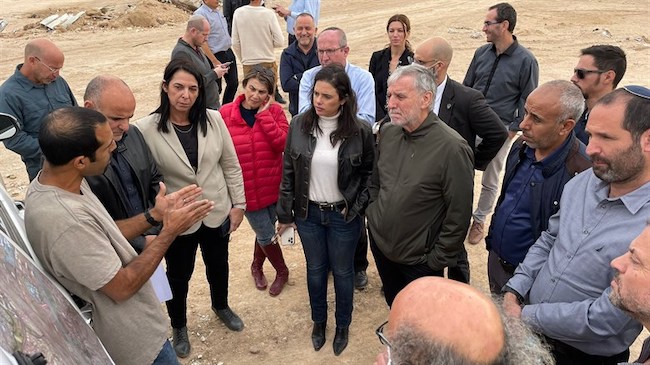 Interior Minister Ayelet Shaked and Welfare Minister Meir Cohen toured the town of Rahav and the Negev on Tuesday. They wanted to see up close the implementation of the government decision in solving the problem of settlement in the Negev through the establishment of the three villages of Khashem Zana, Abda and Rahma.

Ayelet Shaked stated, “All Israeli government ministers are fully engaged in carrying out the regulation of settlements.” (She is referring to he Bedouin settlements, of course.)

Regavim is publishing a book with a fitting title called “Bedouistan.” “It reflects what we’d like to share with every citizen of Israel: Right under our noses, there’s a state within a state growing in the Negev,” says Avraham Binyamin, Head of Policy at Regavim. “We also point out the major problematic incidents that have plagued the Negev, which we find out about sporadically.”

We don’t know if regulating the Bedouin settlements will stop illegal activity. What we do know is that a concerted effort still has not been made to regulate Judea and Samaria. Jewish residents there continue to live with no electricity, water or basic infrastructure. It is disturbing to see the other side appeased once again. The direction of Prime Minister Naftali Bennett’s government must do an about-face, get serious, and give priority to Israel’s own. A sovereign nation must not neglect its people, and this is exactly what is happening.