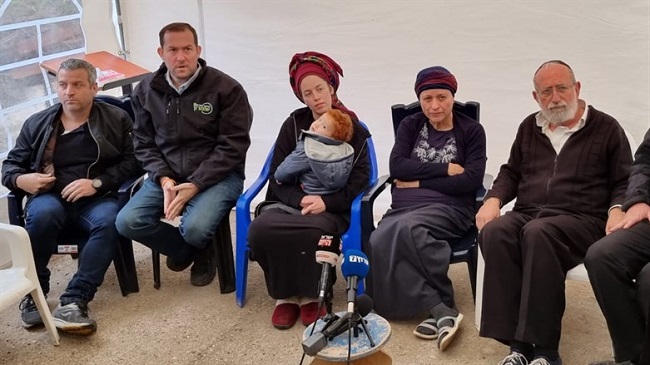 IDF and police forces on Sunday morning demolished three structures that had been built during the night in the Homesh settlement. Homesh is home to the Hesder yeshiva that was attended by Yehuda Dimentman, H’yd, who was murdered in a terrorist ambush last Thursday.

Religious Zionism Chairman MK Bezalel Smotrich issued a statement: “The lax left-wing government decided to reward terrorism and ordered the IDF and police to eliminate the yeshiva in Homesh in response to a terrorist attack in which Yehuda Dimentman, H’yd, was murdered. They don’t demolish the terrorists’ homes, but they are demolishing the yeshiva.”

Ettya Dimentman, the widow of Yehuda Dimentman, “They are toying with a family which is sitting shiva as if we don’t have feelings.” She also addressed the Prime Minister: “Bennett, you grew up on the values ​​of Torah and morality, and Yehuda was a man of justice. It seems a small thing to ask that the yeshiva remain in Homesh, but it is a big step towards the redemption. On Thursday we will go up to the grave and from there we will walk back to Homesh.”

The demolition in Homesh is the latest destructive step with Bennett leading Israel down the road to disaster.

AFSI stands in solidarity with the Dimentman family and the residents of Homesh.