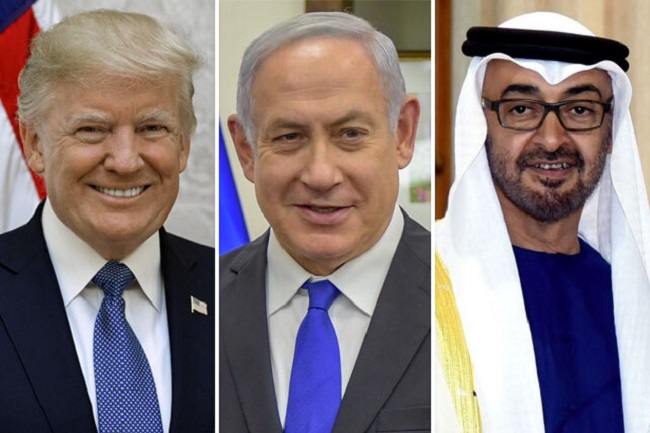 President Donald J. Trump, Prime Minister Benjamin Netanyahu of Israel, and Sheikh Mohammed Bin Zayed, Crown Prince of Abu Dhabi and Deputy Supreme Commander of the United Arab Emirates spoke last Thursday, August 13, and agreed to the full normalization of relations between Israel and the United Arab Emirates. The agreement is called the “Abraham Accord.”

The official White House release states that this is an historic diplomatic breakthrough intended to advance peace in the Middle East region and is a testament to the bold diplomacy and vision of the three leaders and the courage of the United Arab Emirates and Israel to chart a new path that will unlock the great potential in the region.

As a result of this diplomatic breakthrough and at the request of President Trump with the support of the United Arab Emirates, Israel will suspend declaring sovereignty over areas outlined in the President’s Vision for Peace and focus its efforts now on expanding ties with other countries in the Arab and Muslim world. The United States, Israel and the United Arab Emirates are confident that additional diplomatic breakthroughs with other nations are possible and will work together to achieve this goal.

According to an Arutz Sheva article, Prime Minister Netanyahu stated, “Sovereignty hasn’t been taken off the agenda. After all, I was the one who had it included in the Trump peace plan, with American agreement. We will apply sovereignty with US approval. It’s not that I had a choice of either applying sovereignty or peace with the United Arab Emirates right now. They [the US] requested a suspension in the application of Sovereignty, but they haven’t taken it out of their peace plan.”

Israel’s Ambassador to the UN Gilad Erdan stated, “… A decades-old paradigm has been broken here, according to which it is impossible to achieve peace and normalization with Arab countries without bowing to Palestinian demands for a withdrawal to the 1967 lines….I think the agreement with the UAE fits in the context of the national right-wing [positions]. This has value for our demand and our insistence on keeping all of the Jewish communities in Judea and Samaria in whatever scenario may arise in the future.”

Americans For A Safe Israel is grateful to President Trump for once again standing strong behind Israel with his behind-the-scenes facilitation of this groundbreaking peace deal.

It is another disappointment that the application of Sovereignty is temporarily suspended and for what may be quite some time. Sovereignty is not a political football nor should it be used as a bargaining chip to appease Arab states. Over the last year, Israel’s opportunity to apply Sovereignty has been missed one too many times. Yes, it is unfortunate that Israel’s numerous elections, the global coronavirus pandemic, and now the upcoming US presidential election, have diverted attention away from applying Sovereignty. It’s also irrational that Israel has to wait for consent from the United States. If Sovereignty is not applied now, then when? Going forward, it is AFSI’s fervent hope that nothing stands in the way of applying Sovereignty. It’s Israel’s right to do so.

Sources:
Joint Statement of the United States, the State of Israel, and the United Arab Emirates ~The White House. August 13, 2020