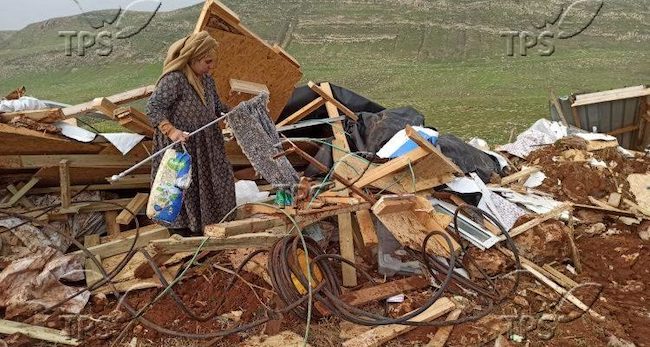 Acting on orders from the government led by Prime Minister Naftali Bennett, hundreds of policemen raided the Binyamin area early on Monday morning and destroyed over 20 illegal structures built by Israelis, including two synagogues.

The massive forces removed the families living in the structures and then destroyed them. Eight families, including 20 children, lost their homes. Resisting the destruction, several residents were arrested.

“A government that destroys the Jews and builds for the Arabs needs to be replaced,” said Samaria Regional Council head Yossi Dagan.

In a separate, but equally concerning news report Member of Knesset Mansour Abbas, head of the Islamist Ra’am party, will serve as Knesset Speaker when Speaker Mickey Levy is abroad for two weeks starting Tuesday. This means Abbas will assume significant powers and influence as Knesset Speaker. If President Isaac Herzog is incapacitated for any reason, the Knesset speaker becomes acting president.

Prime Minister Naftali Bennett’s government has truly become anti-Jewish and anti-Zionist. Its leadership is blind with no foresight on the immeasurable – and potentially long-term damage that could affect Israel. Have they forgotten why the State of Israel was founded in the first place?