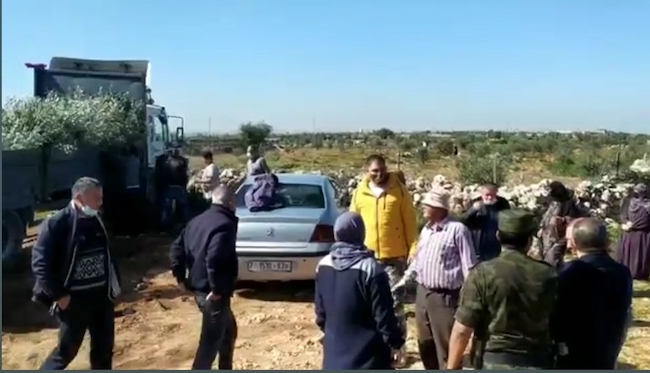 The Palestinian Authority held a ceremony on Sunday, planting some 2,000 olive trees on Israeli state land, in IDF Training Ground 203.

The event was filmed, photographed and publicized by Fatah – affiliated Radio Zeituna and on social media. Armed Palestinian Police officers were among those in attendance, and were filmed as they entered the IDF firing zone – despite the fact that are prohibited from entering Area C, the section of Judea and Samaria under Israeli jurisdiction pursuant to the Oslo Accords.

This event is one element of a large-scale project that has taken shape over the past several years, in which the Palestinian Authority has planted millions of trees as a means of illegally seizing control of thousands of dunams in Area C.

The Palestinian Authority’s “agricultural annexation” focuses on land adjacent to roadways, surrounding Jewish communities, as well as state land – particularly in locations that are of high strategic and political importance.

“The Palestinian Authority has joined the Tu B’Shvat celebrations with well-planned ‘agricultural conquest’ projects – and thus far, the State of Israel is fast asleep,” said a spokesperson for Regavim. “These projects are supported by massive European funding, and the targeted locations are chosen with care to serve a clear and publicly-declared purpose: changing the map, by creating facts on the ground – and all within spitting distance of Rosh HaAyin and Gush Dan.”