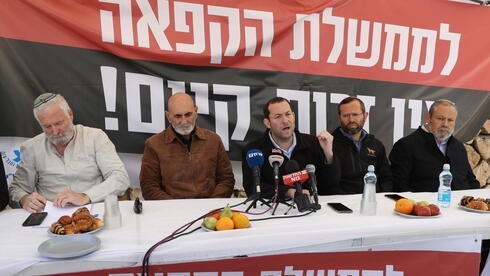 Yesha Council leaders launched a campaign Sunday to bring down the coalition and force a new round of elections due to what they deem as biased government policies. The Council was prompted by the government’s decision to “freeze” Jewish construction in Judea/Samaria, while effectively ignoring any illegal Arab construction.

The press conference was held in front of Prime Minister Naftali Bennett’s Jerusalem office. Yesha chair David Elhayani accused Gantz of ceding Israeli territory to the Palestinians and endangering national security. “Thus this government has no right to exist and should be toppled,” he concluded. Shomron Council head Yossi Dagan added: “The government is destroying [Homesh] and freezing construction in the “West Bank,” all while abandoning the Negev. Such a government will fall.”

AFSI applauds the Yesha Council for advancing its activism in the fight to secure Israel’s land. We continue to remain alarmed by the about face Prime Minister Bennett takes as he appeases the PA. Let’s not forget that Bennett himself is a former chairman of the Yesha Council, which makes his actions today all the more disturbing. Until Bennett does an about-face and holds true to his election promises, he cannot be trusted and is a threat to Israel’s safety and sovereignty.